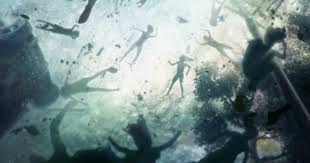 On December 26th, 2004, thousands of families who had come to vacation in various coastal resorts around the luxurious South Pacific began their day like any other in what, by all accounts, exists as a paradise on Earth. Would they go diving, snorkle, or stay in bed enjoying the sunshine and ocean view from their windows? Would they splash around in the pool or enjoy the beach (just a few steps away…)? Most accounts from that day were given by tourists, but imagine that residents of Phang Nga Province, Batticaloa, the Langkawi islands, Tapaktuan, and Leupung -picturesque towns along the coast of Thailand, Malaysia, and Indonesia- began their days in the usual manner; some worked, others spent time picnicking or at the beach with their children, most of whom were home for winter break. The day was full of possbility, but within minutes, these images of home and security, paradise and serenity were transformed into hot spots of natural destruction.

Before anyone saw the tsunami approaching, an earthquake caused severe tremors. In the following days, weeks, and months, the death toll rose, numbering hundreds of thousands dead and many more thousands irreparably wounded by the onset of a wall of water that hit, drowned, tossed, and mutilated everyone in its path without more than a few minutes warning -notably the earthquakes violent quaking. Many locals and visitors alike didn’t know what they were seeing when the water receded and the wide, white crescent appeared on the normally blue-on-blue horizon. As a result of the curiosity and awe of the victims, we have a great deal of footage shot by people who did not know that they should run from the oncoming waves. Eight years and many documentary films later, we watch tourist’s footage thinking ”how could they have just stood there? What were they thinking? Run!” But think again: who takes their loved ones to paradise expecting to meet a natural catastrophe? Who sits by their resort’s pool, overlooking the beach, watching for signs of danger- perhaps a receding tide? That’s another movie- one of those traditional apocalyptic horror films. ‘The Impossible’ is about the overhwelming number of people who were lost and how one family, with what the mother, Maria Belona, called their “terrible luck”, reunited in the chaos of the tsunami’s aftermath.

‘The Impossible’ was made by a filmmaker Juan Antonio Bayona and writer Sergio G. Sanchez, who received a lot of attention for their first feature, ‘The Orphanage’ (2007). It is fitting that filmmakers known for making a praise-worthy horror film might make a timely mark by telling a story of true horror, in the most natural sense of the word: a wall of water, unstoppable and completely destructive. Bayona and Sanchez made the film upon great reflection about the story, recognizing a human element that rarely presents itself beyond the bounds of total devastation. Over the course of between 22 and 25 weeks, they filmed this heart-wrenching story of survival, starring Naomi Watts (Maria) and Ewan McGregor (Henry).

Being the duo’s second feature, they managed their special effects by keeping it natural, which was, of course, more affordable, but the effects will leave viewers in shock. They filmed at a huge water tank, using real water and micro-scale models instead of beyond costly CGI effects. According to Bayona, Watts spent six weeks in the tank, under water in what ended up looking like an immesaurable washing machine cycle filled with swirling jagged debris, on screen. By many survivor accounts, the underwater view-point depicted by Watts is as real as viewers will get to being in a tsunami without being caught in a tsunami. It is the most terrifying scene I have ever watched in my life. No horror film compares to the real-life horror experienced by so many unfortunate individuals on that fateful day in 2004, Watt’s character, Maria among them a survivor.

The film is expertly shot, written with heart, logic, and suspense intact -blended terrifically. Sanchez added elements from many testimonies he heard over a period of months, bu primarily with the blessing and quotation of Maria Belona, who survived to tell her story, along with her husband and three sons. During the panel discussion at the end of the screening I attended, the audience asked a few hard-hitting questions, two of which provoked heart-felt responses from Sanchez, particularly. The first was as why the filmmakers, both from Spain, chose to make the film in English, with famous actors from the United Kingdom. Sanchez and Bayona responded that in a practical sense, the first part of the film would have been in Spanish, but the rest involved so many different nationalities that it was more honest to write it in English, the language that most people used to communicate during the disaster and after. Beyond that, they said the characters could really be from anywhere, as we only ever know that they traveled to Thailand from Japan on vacation. Their ambiguous national standing allows viewers to relate to them as we should to all victims: beyond national ties.

The second question was about how the filmmakers and cast were able to get beyond the “happy ending” the film has, knowing full-well that the family they portray was one of the few to make it out physically intact, alive, and together. This question prompted Sanchez to pause sympathetically and say that the film is very much for the 300,000 lost. It was made in such a way as to honor the dead and damaged, to show what happened and that it was no one’s fault or burden who had survived, just the hands of fate. He directed the audience to the back of the theater, where Maria Belona was seated among the other viewers. She stood up and responded respectfully, but with great emotion, that her’s and her family’s was and is a “terrible luck”, because they survived and came together, but saw so many die without ever seeing their loved ones again. She told her story to honor the dead, so that their suffering would not be forgotten, and would be a reminder to others to live more fully. The audience left with more than they had come for- their own vision of death, and a cue from a true survivor to live the life each day brings in the face of death.